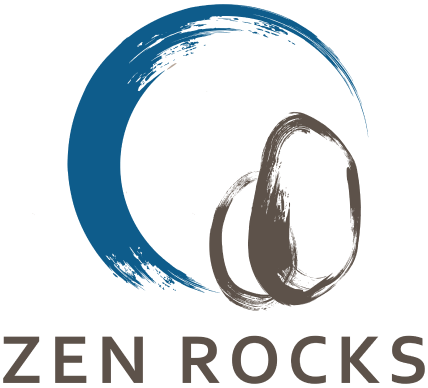 After 22 years in San Francisco, Vivi and Eraj left their respective careers in film-making and high-tech marketing to come to Greece and establish NYSY Studios & Academy for Yoga and Pilates, and Avocado Vegetarian Café —two bright centers in the heart of Athens, beacons of community and positive living. Their goal has always been to support people to find their true, joyful, giving, and compassionate self.

This particular gaia/earth in Mani invited them strongly back in 2007. Accepting the land’s invitation, they vowed to build a retreat that would make it possible for people to come and enjoy the stunning and healing qualities of this rare place.

They are now in the great position to invite you to enjoy the absolute beauty of nature, swim in exquisite beaches, walk, hike, enjoy sports like bicycling and kayaking, visit nearby charming villages, ancient sites and byzantine churches or simply relax and let the magical essence of this place heal you. Few places can match the quietness and tranquility of this heavenly olive grove. 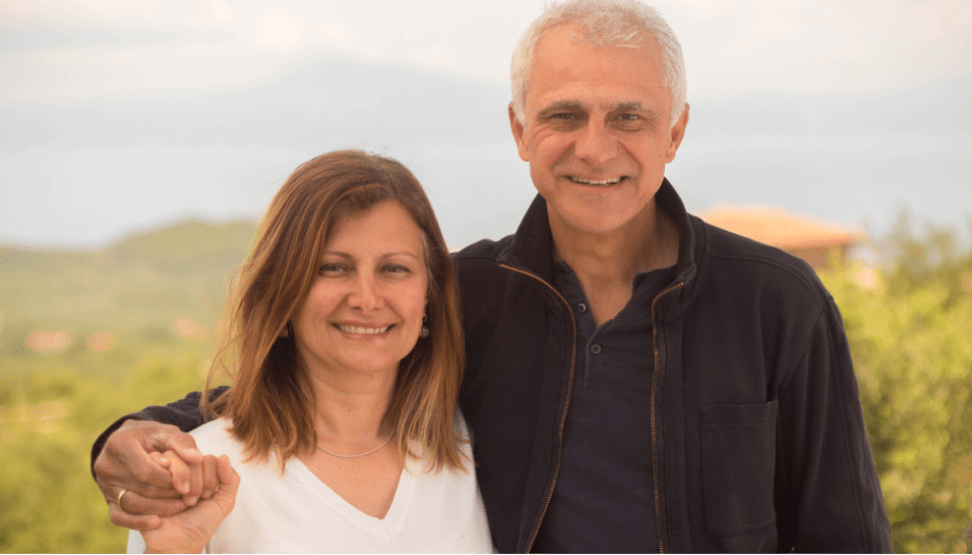 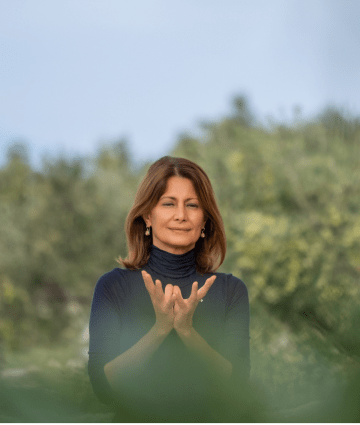 For Vivi Letsou, teaching is a way of sharing the richness of life’s journey. Anusara Yoga lays the foundation for a healthy body firmly grounded on this earth, and inspires the heart to align with its highest essence. A journey that both respects and frees us from our physical limitations, engages the mind’s deepest thinking, and brings us to the joy of the heart, is a journey worth delving into. This is the experience that Vivi loves to share with her students and friends. In the words of her Anusara teacher, John Friend: “We practice so we can bring more beauty to this world.”
‍
Vivi has lived her life in just this way. Curious and excited as a child she discovered Philosophy, Indian thought and Buddhism through books borrowed from a small library in her native Greece. At 17 she moved to California, where she completed her studies in aeronautical engineering, theater, dance and film, and then went on to become a film director/producer for two decades.

For over 20 years she has practiced and taught many styles of yoga from hatha to ashtanga. And she has been deeply touched by the teachings of her Zen teacher, Tenshin Reb Anderson, who is considered “one of the rare living zen masters today.” Reb’s words point to the way we are all inter-connected, and remind us that “Enlightenment is the way we help each other.” Vivi Letsou after 22 years in San Francisco, Vivi and her husband Eraj left their respective careers in film-making and high-tech marketing to come to Greece and establish NYSY Studios, a lively center in the heart of Athens where people meet to practice Yoga, Zen meditation, and Pilates.

Their goal is to be a great support for people to find their true, joyful and compassionate self. Especially now, in times of challenge, Vivi and Eraj are inspired by their beloved yoga teacher and friend, Rusty Wells, whose life-style and philosophy encompasses the essence: “Let Love In, Let Love Out!”

Discovering yoga in the 80s, Vivi Letsou feels immense gratitude for her first teacher Kali Ray who illuminated the path of Tri-Yoga, a beautiful flowing vinyasa style of yoga. Asthanga was the next discovery with senior teacher, Tim Miller being a true inspiration in dynamic practice. Having the good fortune to study with many inspirational yoga teachers, she is blessed to have heard the simply powerful words of her beloved teacher and friend, Rusty Wells: “Be Kind, Be Love!” And to be motivated by such vibrant teachers as Anusara’s Desiree Rumbaugh, who stands firmly for what she believes: “Love is Stronger than fear.” Vivi found her true teaching voice in Anusara yoga. Anusara has offered her a powerful, all-encompassing method to teach yoga, and an effective way to touch people in a positive, uplifting, and healing way. She offers teacher John Friend her eternal gratitude for sharing this wonderful way with the world, and for being a constant source of guidance and support.

Vivi’s training in Pilates includes studies with the Physical Mind Institute, Ellie Herman Pilates, and BASI Pilates™, a system she has grown to love and teach with great enthusiasm. Vivi Letsou

She teaches classes and privates daily, and her highest joy is to see students empowered, healthy, and uplifted. Also, to see the team of teachers & administration at NYSY & BASI growing harmoniously to support each other and the community.

Vivi believes that the key to good pilates is good training. Thus she has worked hard to bring the BASI Pilates™ Teacher Training programs at NYSY. In an effort to support pilates teachers to continue learning, Vivi spearheads the annual Athens Pilates Symposium, a fun, experiential, and highly educational international Pilates conference, one of the most successful in Europe. And she oversees the new workshop for pilates teachers “Skills in Excellency.”

For over 20 years, Vivi followed her zen teacher Tenshin Reb Anderson in Meditation Retreats and marveled and the profundity of his teachings. If she was a better zen student she would have been enlightened by now, but not wanting to miss the opportunity of studying with this rare master, she keeps staring at the blank wall…

Reb, meanwhile, keeps giving away the secret to Enlightenment: “It is the way we help each other; the intricate way through which we are all inter-connected.”

Enlightenment is the way we help each other 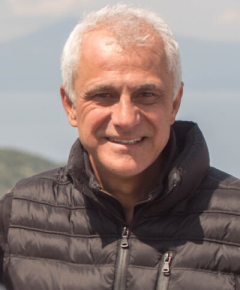 Eraj Shakib is a creative and compassionate entrepreneur, motivated by his passion to realize business models based on humane and compassionate ethics!His business outlook was not always inspired thus.  Persian born and raised in Great Britain and USA, Eraj worked in a rather passion-less Marketing & Sales job in the computer industry in Silicon Valley, California. Then one day, he met his wife to be, Vivi, and suddenly took the leap of faith to follow her to her homeland in Greece, joining the dream:  to discover a quiet spot in a nature and build a retreat where people would come to revive themselves through rebuilding their relationship with nature and other beings.  Yoga, meditation, and a vegetarian diet would be key ingredients in the mix.
‍
Arriving in Greece in 2004, their first dream went on the back burner as Vivi and Eraj first opened  NYSY Academy for Yoga and Pilates, and Avocado Vegetarian Café—two bright centers in the heart of Athens fostering community and a compassionate/healthy lifestyle.

Eraj is the heart and mastermind behind Avocado.  A deeply sensitive and passionate man, Eraj also likes to stay active and create new ventures with other people.  Becoming a vegetarian himself in Greece, Eraj wanted to share with people the significance of eating really delicious food without sacrificing animals.  His Avocado Vegetarian Café was an immediate hit, even though he dared to open it amidst the worst economic crisis in Greece, in June 2011.  The restaurant has become a favorite among international tourists and locals alike, garnering top reviews and International awards, but most importantly, it is a warm and hospitable establishment operated by a team of stellar, friendly, bright and earnest people.  Team spirit, the philosophy of giving our best to our work and others, inspired by true care for the EARTH and all beings, have been the foundational success Keys for Avocado.  Eraj’s high ethics and full-heartedness is reflected in each and every one of the 25-member team of Avocado employees.  A tiny restaurant, operating in complete adherence with laws and taxes and making it in today’s tough economic conditions in Greece, is no small miracle.

This new model of doing business based on Upright Ethics, Compassion, and Inter-dependence is the message that Eraj and Vivi would like to share with the world. They want to inspire especially young people to do the same and devote themselves to doing work they love and to giving their best effort to everything they do.  Young People are the hope of this planet.  Through positive attitude our Youth will surely make a difference, and will live to see THEIR DREAMS COME TRUE.

In the summer of 2017, Vivi and Eraj enjoyed the thrill of seeing their life long dream realized, at least the first phase of it. They opened the doors to Zen Rocks Retreat, a stunningly beautiful retreat center in Mani/Southern Greece, dedicated to re-building human potential through the healing practices of Zen, Yoga, Meditation, Pilates, Exercise, meaningful nutrition, and restorative living.

With a full roster of retreats slated to unfold in the summer of 2018, from May to Fall,  Eraj is ready to play the role he plays best: Being the most gracious host to all guests.  Vivi likes to call him, “A Persian Prince”, and that he is in the full sense of the word.  Have you even been waited upon by a true Persian Prince?

In his mid-fifties, Eraj likes to stay active playing football like a teenager, doing sea ski sports, and also playing golf with his buddies.   Traveling is one of his favorite past-times, his most favorite being hanging out with his pets, friends, and family in Mani.